History of the Westminster Fire Department 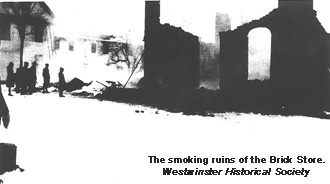 Major fires often lead to improvements in firefighting.  On April 10, 1910 the bridge across the Connecticut burned in what was described as "one of the most spectacular fires ever seen in the vicinity".  In March of 1917 a fire started in the Parsonage barn and spread to the Parsonage, which also housed the Westminster West Library.  Little was saved, and the fire spread to the Harlow's then the Miller's.  Although there were many volunteers, there was no equipment beyond buckets.  In one night ,fire changed the face of Westminster West, removing three large old mansions.  Three months later two Harlow barns, located 2 miles from the village, were struck by lightening and burned.  The family was unaware until the next morning.

All these fires were the impetus for Westminster Village to create a Fire Department.  A petition was signed by seven residents and was received on June 26, 1917.  A committee was formed to gather additional information and on November 3, 1917, at a special meeting, the Village voted to purchase a chemical fire engine, cost not to exceed $400.  For the next twenty years the engine was housed in various private homes.

In the winter of 1922 the Brick Store burned to the ground.  The chemical pump was of little help and Bellows Falls was called in to fight the fire.  On September 27, 1931 the Baxter Brothers Cannery burned to the ground.  Walpole and Bellows Falls were called to fight the fire.  Surrounding structures were endangered and several freight cars were badly damaged.  Damage was estimated at $140,000.  On November 10, 1937 fire consumed the Jasper Wright Farm in Westminster West just before a fire on School Street in the Village burned the Fenn horse barn, tool shed and sawmill and Comstock's garage and barn.  Whipped by high winds, it spread to other buildings and threatened several houses.

In 1937 Village Trustees became aware better fire protection was needed, and in December they approved the purchase of fire fighting equipment, not to exceed $1,200.  Much of 1938 was spent organizing the Fire Department, obtaining equipment, training, and making arrangements to use the water tanks in homes that had them during a fire.  Not much was spent on safety for the firefighters since they felt they needed equipment more.  To test the system, on October 9, 1938 members responded to the school house and were able to get water to the pumps 14 minutes after the alarm sounded.  The stream of water was high enough to wet the entire roof. 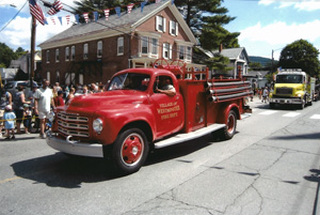 During the summer of 1939 there were two house fires.  The Francis Parker home on Pine Banks burned in June.  On July 7th the Department responded to the Phelps place on Upper Street.  It was impossible to save the barn, but part of the house was saved.  After the fire, letters praising the Department's handling of the emergency were received from Walpole Fire Dept. and Brattleboro Trust Company.  Walpole arranged for Westminster to respond to fires off the main roads as they were better able to get enough water to these buildings.  In November, 1941 the Department bought six red fire hats and coats, the first protection for firefighters.
During World War II seven firemen were in the service and manpower was in short supply so the age limit was dropped to 16.  After the War things improved.  In 1945 the Village bought a building lot on Grout Avenue, and the first firehouse was built during 1945 and 1946.  The land and building cost $2,290.

On New Year's Day in 1947 the Westminster Inn burned to the ground, but the Westminster and Bellows Falls Fire Departments were able to prevent fire from spreading to the nearby Institute and Kenneth Fullam home.  Later that year, the Chickering barn burned.  About that time area fire chiefs were discussing the advantages of mutual aid system.  However, the Westminster Chief was unable to summon help to the Chickering fire because the phone lines were tied up by the curious wondering what was happening.  In August 1947 Westminster bought an engine from Springfield for $205 and Westminster West bought a pump for $165 that would be available for forest fires if needed.  In 1952 a new truck was purchased for $7,000 - the pressure it generated was astounding. In 1955 the red phones were put into place and in 1963 Westminster joined the South Western Mutual Aid.

In 1963 the Department purchased a base station (radio) and two truck radios and in March 1965 departments began being dispatched from Keene, NH. The dependency on the phone system decreased further in 1965 when men began to buy fire monitors, radios that allowed them to be paged at home or work.  While fighting a trailer fire in the 1967, Bill Wilder suffered a fatal heart attack.  In 1972 two Scott Air-Paks were purchased - a huge improvement over a wet handkerchief to protect against smoke inhalation.  The Fireman's Auxiliary was founded in 1973 and began fundraising to provide additional equipment the Department needed.  They also provided food at the scene of fires.

At Town Meeting in 1979 Westminster voted to form a town-wide fire district under a three-member Prudential Committee.  The Vermont legislature approved the new district on March 27, 1979.  The Department now had responsibility for the whole town, not just the village, and in return the whole town supported the Department through taxation.  By 1981 there were thirty-five members, but more volunteers were needed from the western part of town, so three women from Westminster West joined, the first women in the Department.

Under the leadership of adults, the First Response Squad was formed in 1981 of young adults with first aid training.  The Squad participated in several training sessions for members and offered training for the 4-H Clubs.  The FAST response team later merged with the Fire Department, which became the Westminster Volunteer Fire and Rescue Department.  One noteworthy event occurred when Jessica West, sixteen years old at the time, responded to an emergency call and on her own delivered a baby.

On December 18, 1988 the West Parish Church was destroyed in a disastrous fire that broke out after a candlelight Christmas service and was caused by an overheated chimney.  The Department was hampered because the nearest water supply was a mile away.  The fire drove home the need for a fire station in Westminster West.  Although some of the members lived in or near the fire they had to drive the opposite direction to get trucks and equipment.  In 1992 the Department asked for $25,000 to purchase land and build a second station in Westminster West using volunteer labor and equipment from local businesses.  Much of the construction was during the winter and volunteers also responded to a lot of fire and rescue calls at the same time.  The new firehouse benefited 250 households, saving on annual fire insurance and putting them within five miles of a station.

On April 9, 2001 a freight train derailed in Westminster where a washout caused the track to crimp.  Two engines, five tankers and three boxcars were strewn down the embankment, and a third engine landed in the river, where it leaked diesel and crank case oil causing an oil slick all the way to Brattleboro before it was contained.  The train also spilled its cargo of 110 tons of road salt.  Forty firefighters responded, twenty-five worked round the clock, and salvage equipment was shipped in from Ohio to assist.   As the crew was cleaning up at the station they received a call - a competitive bike racer suffered a massive heart attack, but was being given CPR.  Since everyone was at the station they were on the scene in less than a minute and used the new defibrillator to resuscitate him - he began breathing on his own.